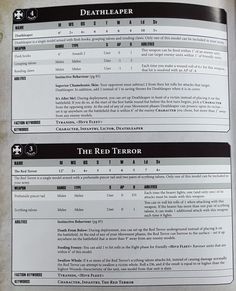 It's like a Drool Cannon but with slightly better range and slightly weaker Strength. They did this so later they can tweak the points for either units or wargear if one is lacking or overpowered. It's not gonna be easy to use on characters though, so your best targets are probably Thousand Sons, Tzeentch daemons, and Grey Knights because they deserve even more pain. If the opponent knows about it, he will do his damnedest to shoot it down before it can reach his gunline, which is also great because then he doesn't focus on the rest of your army, and with T8 13 wounds and a 3+, this is easier said than done. That model can fall back, shoot and charge.

Have faith in wonky psychic invuln saves on your big nasties when your opponent aims 10 lascannons at them. The options given back to the 'Fex can suit them into any role you want, and sometimes even better at it than the monsters made for the job looking at you, Haruspex. It's got a similar statline as the basic Bio-Plasma, but with three times the range, Heavy 6, and does 2 Damage each hit. Could work well when paired with the Adaptive Biology Warlord Trait if you have a way to live through that one phase, which is the same problem the Trait has. Adds a bit of flexibility against unarmoured opponents as they can re-roll 1s to hit; combined with the Broodlord ability. After poking the opponent with this, weather their now weak attacks, then on your next turn, fall back and shoot your Fleshborers into them. On a 2+, that model suffers a mortal wound. My other 6th edition 40k Army, Eldar, saw a host of new rules and facets with its most recent release Battle Focus, Bladestorm, more wraith-goodness and Target Lock, to name but a few. And Synapse stuff gets it automatically. If I added correctly Warriors with lash whip and bone sword plus a deathspitter are 30 points a model, 90 for a minimum 3 model brood.

It's only really useful against exactly 4 or 5 wound models of unit types which rarely have that number, but becomes much more useful against armies with widespread access to FnP equivalents read: anything related to Nurgle , which are more likely to survive being wounded. Classic Crabby lad The old mainstay had its ups and downs, and only time will tell what this change turns into. I admit, it's not exactly convenient- but at least everything you need to calculate points values is there on one page spread, and if they do put out an app the way they did for AoS it will be fairly trivial to calculate things at that point. I currently collect Sylvaneth, Ogors, Beastclaw raiders, Daughters of Khaine, Tyranids, Chaos Daemons, Chaos Marines, Ultramarines, Blood Angels, Necrons, Imperial Guard and Dark Eldar I have a bit of a problem! Units fully within or on this piece of terrain do not gain any bonus to their saving throws for being in cover. Choose a piece of terrain other than fortification. Having 22W, T8, and a 3+, this guy is pretty tough to kill. This all only adds insult to injury when you realize you're spending 3+ command points plus reinforcement points just to pull this off. 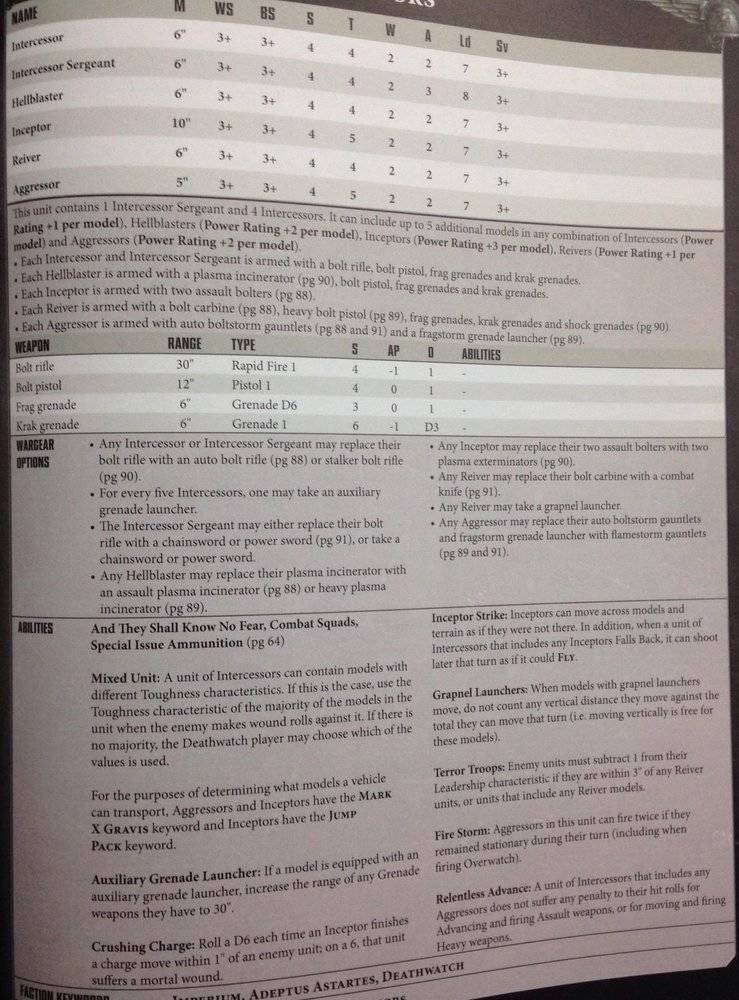 In other words, this is pointless in Matched Play. Situationally useful, but good synergy with wargear, like rending claws, which activates on the same condition, and obviously best used against multiwound models like terminators or, weirdly, vehicles, since they don't have keyword restrictions on what they hurt. Banshees are finally useful again, especially since a wave serpent is now a viable transport for them again. I was a diehard Warhammer Fantasy player and never was interested in the sci-fi grimdark in the least. Well, with the death of blast templates this formerly large blast is now Assault D6. It is going to eat melta and lascannons so your hive tyrants can live. .

One of them is Biel Tan Aspect Warriors and the other is Alaitoc Pathfinders. So you can crack open the can full of food people. Knights are many times lacking the numbers to take on objectives so bring Astra Militarium to shore up this weakness. Combine with Enhanced Senses and laugh at the look on your opponent's face as a Carnifex hits on a 2+. They have the option of a fleshborer hive but really I used mine to represent devourers anyways… had nothing to do with how terrible the fleshborer hive choice is… honest. Thanks to the change from small templates to D3 shots, this is now actually plenty scary against vehicles of any size. It ties with the Prehensile Tail as the cheapest tail.

Warhammer Reddit Directory Looking for more of a certain thing? The way I read the new Matched Points system you only pay for the extra war gear you want to equip, under the war gear section on their profile. They're fragile and will get shot down if focused, so use your ability to charge to your advantage; use it to protect your bae from being shot down by forcing your opponent to fall back with their backline unit or if you're lucky: units. Roll a 6+, and that becomes d3 Mortal Wounds. If the roll exceeds the model's remaining wound count, it is instantly slain. Use the Guards for ranged and mobile anti-armor or character assassination, It's a shame they can't take a Doctrine if taken this way, but hey- you can still legally take a Baneblade with your 'Nids. However, then you realise it hits on 2+ and has 2 pairs of scything talons, giving it 1 more attack and allows it to re-roll 1s to hit. 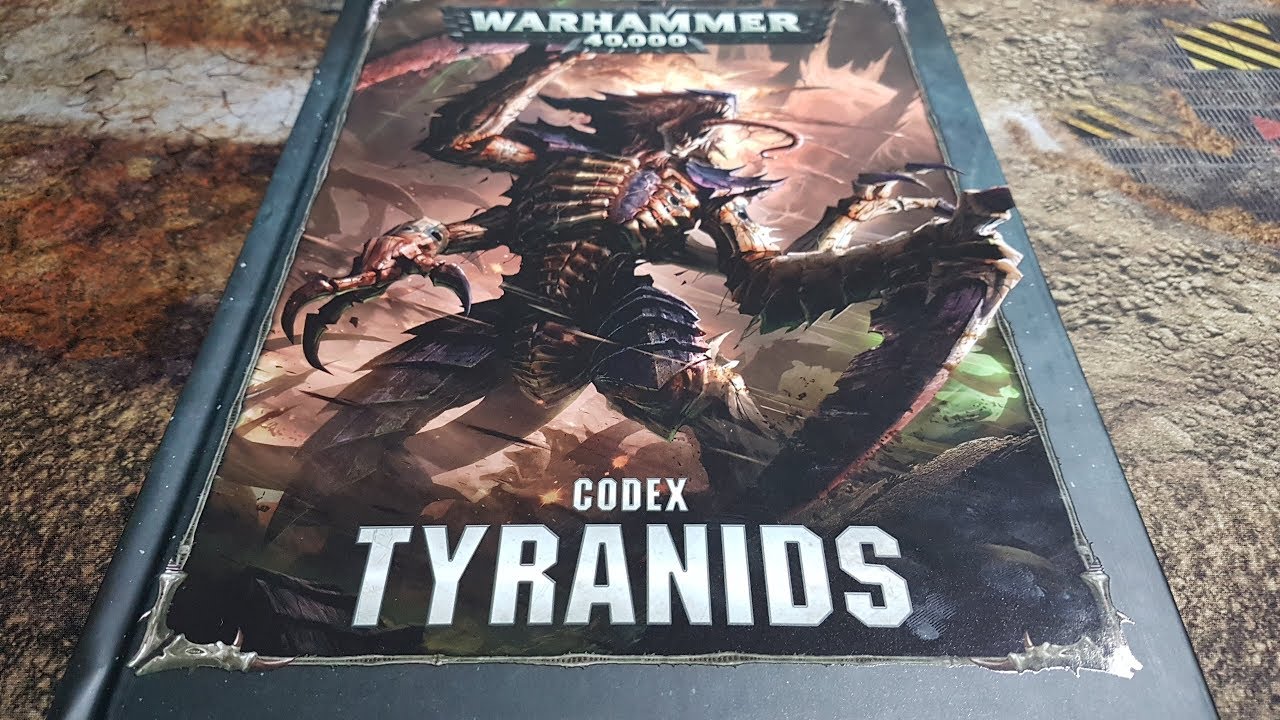 When this model slays an enemy model in the fight phase, you can reroll hits in all subsequent fight phases for this model. This means means they are hitting on 2s re-roll 1s for maximum dismemberment. But to really crank the power up to 11 with Genestealers, take them in units of 10 or more to trigger their Flurry of Claws special rule, bumping them up to 4 Attacks each. Effectively Hive Tyrant only due to the short range of the auto-hit effect as he's the only character that can take a venom cannon to start with, and should always be paired with Wings so you can get into auto-hitting range faster. Probably also a local meta thing.

You can buy bio-plasma, which really isn't a bad gun, it just won't do much against the targets you'll be trying to shove your Carnifex into. Is it going to be another paperweight? Shrikes also have the better save 4+ vs 5+ and being Synaptic they'll never have to worry about morale making half the unit run away, but then again on the other hand Raveners can pop up and try to charge the turn they arrive; at most they'll have to sit for a turn before getting into combat whereas Shrikes are perhaps more likely to get tagged a couple of times on the way in. Naturally, you will want adrenal glands and toxin sacs, and you should grab a bone mace tail. It may be a Tyranid, but it has the decency to at least open its lunch box. Your warlord can re-roll all failed to hit rolls when targeting that unit or any other unit with the same datasheet target a tactical squad and get the bonus against all tactical squads. Interestingly, it has precisely enough range to fire after getting out of a Tyrannocyte. However, when you trigger this strategem on a unit that just advanced, it's movement characteristic remains modified.